Majority of our 'rakyat' are poor?

It comprises 98 percent of the total investors. If the price of shares was at 80 sen a unit, then those more than 1.2 million investors are having about RM4,000 or less in their accounts!

Perhaps a large number of them owned less than 100 shares (valued at about RM80). Imagine only two percent of the shareholders having more than 5,000 shares.

Based on the profile of ASN investors, pardon me if I am wrong in my assumption that the majority of our 'rakyat' are poor! I dared to make this claim because there are also other scenarios and developments that support it.

Under the one-off cash payment (RM500 for the first year) it was found out that only about 20 percent of household in the whole country with an income of more that RM3,000 a month.Through BR1M and BR1M 3.0, over 7 million households (received BR1M) totalling RM4.6 billion.

With the majority of the rakyat has an income of RM1,500 or less that that for a month, were they in the category of those with high income as desired by some of our leaders? The rakyat with an income of RM1,500 and less a month was not far from the line of poverty whats more if they live in cities and metropolitan ares.

In my opinion, after realizing that the majority of our rakyat were poor or from the middle class strata (about 80 percent of the population), then drastic actions should be taken and implemented to rectify them in short and long terms but surely not by giving them cash handouts as done by our leaders.

If we give the people say, RM500 under the one-off cash payment, that it is like giving fish to them; they would finish the food fast but if give them fishing apparatus, hopefully they would be able to 'land fish' on a regular basis for the rest of their lives.

Those in power too must take effort and work hard to make sure that the prices of daily necessary items such as rice, sugar, wheat, milk, cooking oil, vegetables, fish, chicken and beef are within the reach of the majority of the rakyat.

In my opinion being able to sustain the prices of necessary items are more beneficial than giving the poor rakyat RM500 once in a while as when the situation requires those in power to do such as winning their hearts in elections.

It was a well known fact that many bus operators who claimed they were not making any profit year after year, failed to give good service to the rakyat in rural areas. Buses were not punctual; some of them had to wait hours after hours at the roadside for their buses.

If the government could spend billion and billion of ringgits to upgrade public transport system in the city such as expanding the MRT line of coverage; then why not spend a reasonable sum 'to cheer up' the rakyat in the 'kampung' and other rural areas. Perhaps, this way is better than making them happy for a day by giving them a one-off cash handouts of RM500 once in a year!

"At RM500 per person, for seven million people it would cost the government RM3.5 billion. Increase that to RM1,200 and the cost would be RM8.4 billion.

"That is a lot of money. Yet there are still a lot of very poor people in the country. Do we really need BR1M? Even without BR1M there was good support by the people," said Mahathir. 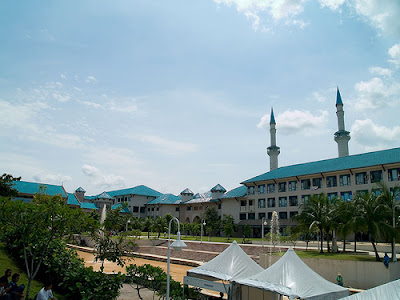 IN his 'kuliah subuh' (early morning lesson) at a masjid near my house on Sunday, August 31st, the 'ustaz' (religious teacher) when discussing the emerging new power of the Islamic State (IS) or the Islamic State of Iraq and Syria (ISIS) in the Middle East and what was claimed about its cruelty including the beheading of two American journalists, James Foley and Steven Sotloff (later on), reminded congregators to study Ayah 6 of Surah 46 or Al-Hujurat (Room).

The verse notes: "O you who have believed, if there comes to you a disobedient one with information, investigate, lest you harm a people out of ignorance and become, over what you have done, regretful."

The ustaz choose 'to tackle' the issue, by dividing it into two parts - one, what Islam wants its followers to adhere to when Muslims are at war and two, the tendency of the media to be corrupt and distort especially in the new world of open space and without borders.

He said Islam is a religion of 'Rahmatan Lil 'Alamin" (blessing to all mankind); in Ayah 107 of Surah al-Anbiya, Allah SWT notes:  "We have not sent thee, O Muhammad, but as a mercy to all mankind."

Islam is a mercy to all mankind but many people distort this statement to understandings that are mistaken. So that raises a lot of mistakes in the practice of religion even in a very fundamental thing, that in the matter of belief.

The ustaz said, cruelty has no place in Islam. Even when dealing with animals, such as slaughtering them for food, the rule is to attend to it accordingly such as mentioning the name of Allah (Bismillah), make the animals die swiftly and easily by using sharp knives but not by sharpening the knives in front of the animals.

Islam is a beautiful religion revealed by God that covers all aspects of life; even there are even laws regarding rearing and slaughtering of animals, what more when dealing with human lives including and in this case 'the beheading' of James Foley and Steven Sotloff.

"If it is true that 'that group - IS' had done that cruelty, then they are not representing Muslims, but they are using Islam for their owngains," said the ustaz.

In the event of war, the ustaz said, the reminder of Sayidina Umar al-Khattab, the second Caliph to his generals and armies when they 'freed' Palestine from the Romans, that they should not kill old people, women, children and those who had sought refuge in their churches and other houses of worship, should be looked upon as a guide to Muslims.

"Even Caliph Umar ordered his armies not to destroy trees and burn lands," said the ustaz, "thus if the IS leaders and warriors committed the cruelty as portrayed by the media then they were doing something which was totally against the teaching of Islam”.

"If they committed cruelty in the name of Islam, they were distorting Islam. But at the same time, have we checked the authenticity of the news (or videos and so on) and those who produced and published them and those who were behind them such as their financiers?”

"In this era of 'fitna', people can do almost anything including portraying others especially their enemies with all sorts of lies and distortion of information. Authenticity and truthfulness of reports are very important as mention in Ayah 6 of Surah Al-Hujurat," said the ustaz.

In our country some of our media men and public figures who claim to be Muslims too seem to do all kinds of distortion, then what could be said about the international media which almost 100 percent of them are run by non-Muslims; the problem is that have we checked their authenticity?
In the past there were even well-known leaders who exposed videos and footage of their rivals in 'hot scenes' with the intention to kill off their careers and parties.

Even some media people who are Muslims do not care about what is halal and what is 'haraam' pertaining to their profession. The question is are our Muslim journalists and owners of publications know and adhere to ‘halal’ and ‘haraam’ in their daily operations?

Of course it is ‘halal’ to report the truth but ‘haraam’ to create and publish false news. But does our mass media adhere to this? Is spinning news for one's gain ‘halal'? If Muslims do not adhere to what is 'halal' and 'haraam', do not expect the enemies of Islam to do so.

Other than that, what is ‘halal’ and ‘haraam’ in the media industry? Of course publishing advertisements of halal products is encouraged but to advertise liquor is ‘haraam’. To publish prayer times is halal and would be rewarded for it in the Hereafter but to publish results of gaming activities such as four digit or sports toto is of course ‘haraam’ and would be punished by Allah SWT.

If some of our local media in this ‘Islamic country' could make 'all sorts of distortion', then are we going to believe blindly, without checking the news and videos filed in and posted by the international news agencies? Have we checked who were behind their operations and who financed their activities?

Nowadays in this new era of information technology, with the advancement of social media, we should be more concerned and careful about the news and feeds we receive; so please adhere to the reminder from Allah SWT in Ayah 6 of Surah Al-Hujurat: "O you who have believed, if there comes to you a disobedient one with information, investigate, lest you harm a people out of ignorance and become, over what you have done, regretful."
Posted by Lanh Sr. at 7:17 AM No comments: